How much electricity refrigerators use?

You are here: Home1 / How much electricity refrigerators use?

Is it worth replacing my old refrigerator?

I need to figure out how much electricity refrigerators use on a daily or weekly basis. My electricity rate just went up and I got a shocker of a bill. How much will I save if I replace the old refrigerator with a new energy efficient fridge?

Twenty years ago, in 1991, I bought a 17 cubic foot refrigerator that used only 1 kwh per day. That was just about the most efficient fridge of that size at the time – but mainly because it had no freezer compartment.

In 2005 we replaced our old refrigerator with a new fridge with bottom freezer. The new refrigerator was an ENERGY STAR refrigerator, and based on a newer, stricter set of efficiency guidelines, but because it was a fridge/freezer combo, it clocked in at 507 kwh per year/42 kwh per month, or 40% more than the 14 year old fridge it replaced. Of course it also allowed us to disconnect our freezer, a 10 cubic foot chest freezer that used 1 kwh a day as well, so overall we came down from about 730 kwh per year to 507. 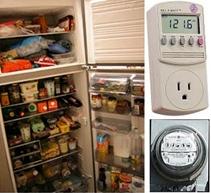 How much electricity
does your fridge use?

Efficiency standards were recently raised in the US, and all new refrigerators sold in the US or Canada must meet these efficiency standards. An ENERGY STAR refrigerator needs to be at least 10% more efficient than the minimum standard. As a result, that same 17 cubic foot bottom freezer refrigerator which was ENERGY STAR qualified at 507 kwh in 2005 would just barely scrape by the minimum requirement by today’s standard, and a current ENERGY STAR qualified fridge of that size would need to use 455 kwh per year or less.

A particular refrigerator does become less efficient over its life, for example because the gasket no longer provides a perfect seal, or because the compressor and the vent louvers get covered in dust, making it harder for the compressor to expell heat. If you notice that the compressor seems to be running more frequently than in the past, that’s a sign of decreased efficiency, which may be caused by these problems, or by a refrigerant leak.

If you have a fridge bought in the last five years, you should assume a consumption of 400 to 600 kwh per year. A refrigerator 5 to 10 years old is probably around 500 to 700, while one 10 years old or more could be double that, because of the combined impact of reduced efficiency of fridges as they age, and the lower efficiency standards that applied at that time.

How much it costs you to run your refrigerator depends on its kwh consumption and how much electricity costs in your area. Even assuming an old, inefficient refrigerator using 800 kwh per year, and electricity prices at the high end of the range for the continental US (around $0.20 per kwh in Pennsylvania) you’re looking at an operating cost of about $160 per year. Cutting that in half with a new, modestly sized, energy efficient refrigerator could save you $80 a year at that electricity price – and with new fridge prices in the $500 to $1,200 range, the savings would pay for the new refrigerator somewhere between 6 and 15 years after purchase. A 15 year payback period may be pushing the limits of expected lifetime of some refrigerators, so may not be worth the investment.

Unfortunately, while efficiency standards have continued to rise, which helps drive innovation and lead to better efficiency per cubic foot of space cooled, the end result hasn’t been a decrease in energy consumption but instead an increase in electricity use and in food waste. Americans seem to have responded to the improved efficiency of refrigerators by opting for ever larger refrigerators, to the point where homeowners view a “chef’s kitchen” with a 20 cubic foot stainless steel fridge and a matching 20 cubic foot upright freezer as the sign of a truly sophisticated home cook. (In my view, unless the homeowner is running a food-based business out of their home, it’s actually the sign of someone who is way too focused on impressing their neighbors!) While this fridge and freezer might have an efficiency per cubic foot that is 50% better than the standard of a decade earlier, the total volume has gone up more than the efficiency, so total power consumption has also gone up. Forty cubic feet of fridge and freezer space is an extreme, but overall fridge size has increased greatly. My mother in law recently redid her kitchen and bought a 20 cubic foot, 36 inch wide refrigerator/freezer unit, and she lives on her own. She was very proud of having bought an ENERGY STAR refrigerator, but the fact is she would have been better off in terms of her energy consumption, if she had purchased a non-ENERGY STAR rated refrigerator that was half the size of that one.

Food waste is the other impact of increased refrigerator size. According to a recent New Yorker article, up to 40% of the food grown in America is tossed out instead of eaten, and much of this waste can be attributed to bigger fridges, which encourage consumers to do fewer, bigger shopping trips, and result in food spending longer in the refrigerator, so that much of it spoils before it can be eaten. Big refrigerators also increase the likelihood that food will go unnoticed in there until it is too spoiled to eat.

I lived for a year in Costa Rica, and I noticed that there was very little food waste there. I also noticed that few people had refrigerators, and those that did tended to have small ones of 8-12 cubic feet. They did their shopping several times a week, and always bought refrigerated goods in small amounts to avoid the problem of spoilage. (The only places I found a gallon of milk for sale were supermarkets that catered to the North American ex-patriots who live there.) I suspect that Costa Rican refrigerators are much less efficient than current north American efficiency standards require, on a cubic foot basis, but I am quite sure that the per capita electricity use from refrigeration is much lower there because refrigerators are small and many people in the countryside don’t have them.