How much does electricity cost?

You are here: Home1 / How much does electricity cost?

What is the average price by US state?

How much does electricity cost? It depends where you live. In the US, the highest electricity prices are in Hawaii, with an average residential cost of $0.28 per kWh as of July 2010. New York and Connecticut are next in line at around $0.19 per kWh each, while Washington, Idaho, Kentucky and West Virginia are the cheapest, at around $0.08 to $0.09 per kWh each.

The following map shows how much does electricity cost for each state. The redder the state the more expensive residential electricity, while states shown in green tend to the cheap end of the scale. 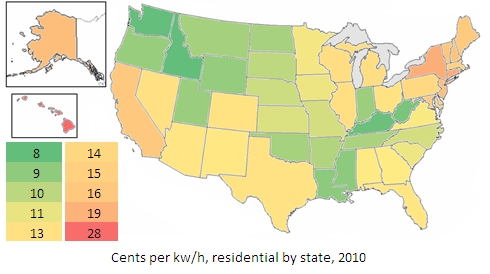 Unfortunately, green on the map doesn’t usually mean green from an environmental perspective. Some of the cheapest states for electricity prices are ones where the bulk of their power comes from local coal deposits or imported coal. For example, among the 5 cheapest states, 98% of West Virginia’s and 92% of Kentucky’s electrical supply comes from coal, while the others are in the 40-60% range. Meanwhile, among the most expensive states, coal accounts for only 10% to 15% of total electricity generation. The greenest states from the perspective of not using coal are actually Vermont, Rhode Island, Maine, and California.

Electricity in Canada is generally a little more expensive than in the cheaper US states, with prices cited ranging from a low of $.07 CAD per kWh in parts of Quebec to a high of $0.17 CAD in places like PEI. And in some parts of Canada the price you see quoted is only part of the equation. For example, in Ontario where I live the price of electricity is made up of four separate charges:

All told, the actual cost I pay my local utility is about 17.5 cents per kWh in Toronto, while the estimates provided by the National Energy Board and various other online sources have estimates of about 13.5 cents. In other words, not everything you’re paying is in the quote you get.

Then there’s the added cost of green electricity: for an added 3 cents per kWh, I get EcoLogo certified green energy from Bullfrog Power, a local green energy provider (with service for residents of Ontario, Alberta, British Columbia, Nova Scotia, New Brunswick, and Prince Edward Island). They source all their energy from small-scale hydro, wind farms, and other renewable sources.

How much does electricity cost in Europe? Prices in Europe range from a low of 0.07 Euros (currently 10 cents US)  in some of the former Eastern-bloc countries such as Estonia, Latvia, Bulgaria and Lithuania, to much higher rates of 0.20 Euros (Germany), 0.22 Euros (Italy), 0.23 Euros (Denmark), and 0.24 Euros (Netherlands).

Is expensive electricity a bad thing? Not at all. Higher electricity prices are the direction we should be going. The more electricity costs, the more people are motivated to conserve energy, whether by upgrading to more energy efficient appliances, using appliances or lighting less often, or trying to shift electrical use to times of day when electricity is cheapest.

Time of use charges also affect how much does electricity cost. More and more utilities are moving towards either market pricing or time-of-use pricing (which is designed to give a very rough approximation of market pricing). Prices for electricity on the open spot market change minute to minute based on supply and demand. For example, during working hours the additional electrical load due to commercial and manufacturing use drives up both demand and supply (and usually drives demand up more than supply, resulting in higher prices), while in the middle of the night demand is typically low. In winter, when electrical heating tends to kick in the most in the early morning and evening as people wake up, or get home from work, the peak price is actually mornings and evenings, not the middle of the day. Here are current time of use rates in Ontario as of October 2010:

The intent of this pricing is to encourage people to avoid using appliances that draw a lot of power during peak periods – for example air conditioners in summer, electric heaters in winter, and large appliances such as electric dryers or dishwashers at any time of year. This is why many appliances are now sold with timers on them so that they can be set to start running several hours after you set them.

To cut your peak-period electricity use on heating in winter (assuming you heat with electricity), you can crank up the heat when electricity is at its cheapest (overnight) and then turn it down at 7am. Unfortunately people tend to prefer cooler temperatures for sleeping than for being up and about at home, but if you can capture that heat – either through a thermal storage heater or by having lots of thermal mass inside your home – it may be a better deal to turn the heat up at night and then let that thermal mass spread its heat through the house during the day. Unfortunately adding a large thermal mass is not that easy. You could fill hundreds of 2-liter pop bottles with sand or (even better) water, or you could put lots of extra decorative statues in your living area. The best way to get a large thermal mass in your home is to include it in the design of a new home. Many passive solar homes have large masonry walls or floors inside the home to absorb sunlight (or other heat) during the day in winter, which they then slowly release at night.

In summer you can cut your peak use from air conditioning by making the house very cool starting at 9pm, and then setting your thermostat much warmer during mid and peak hours. If you keep your windows closed as well as curtains and blinds, you can keep the house cool for many hours after the air conditioning has been shut off.

Because these cookies are strictly necessary to deliver the website, refusing them will have impact how our site functions. You always can block or delete cookies by changing your browser settings and force blocking all cookies on this website. But this will always prompt you to accept/refuse cookies when revisiting our site.