How do fluorescent lights work?

You are here: Home1 / How do fluorescent lights work?

First let’s review how an incandescent light works, in case you can’t quite remember.

A filament made of an electrically resistant material, usually tungsten, is suspended between two electrodes, inside a bulb from which the air has been removed, and a low-pressure, inert gas has been injected. 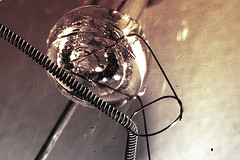 When electricity passes through the filament, the current encounters electrical resistance from the filament, which generates heat. This heat causes the material to emit photons (just as your electric stove element emits photons as red light when it’s turned up high). Those photons are the light produced by the light bulb.

Notice that this process involves heat – a considerable amount of heat, in fact. This is one reason why incandescent light bulbs are not energy efficient – in most incandescent bulbs for home use, only 2-3% of the electric energy gets converted into visible light; most of the rest becomes heat.

There are ways to make incandescent light bulbs somewhat more efficient, but most of the methods involve a tradeoff between efficiency and bulb lifetime, or efficiency and cost. Halogen light bulbs are a type of incandescent light bulb with halogen gas instead of an inert gas; they are slightly more efficient, but more expensive. In many home installations more watts of halogen lights are installed than would normally be installed for incandescent bulbs, because of the very directed light that halogen bulbs emit. A false economy of sorts.

Because of the high temperature at which an incandescent light filament emits light, filament material is subject to evaporation, which eventually leads to the familiar dark spots along the filament itself, and finally to filament breakage. Evaporated filament material also coats the bulb over time, reducing its brightness and giving one part of the bulb the familiar black spot.

First of all, fluorescent lights don’t generate nearly as much heat as incandescent bulbs. That is one of the key factors that makes them so much more efficient. As well, the lack of a super- heated filament subject to evaporation and breakage substantially increases the life of a fluorescent bulb. But how do fluorescent lights work? 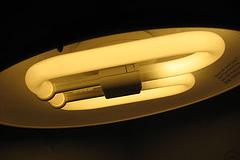 A fluorescent light is always in a tube configuration: a long, hollow space in glass, with a terminal cap at each end connected to a power supply. A compact fluorescent bulb twists this tube into a spiral shape, while a circular fluorescent bulb is actually a circle interrupted at one point by the terminal caps, which are usually hidden by a plastic cover.

A tiny amount of liquid mercury is placed inside the fluorescent tube, and the tube is then filled with argon gas.

When electricity is passed through the tube, from the terminal cap at one end to that at the other end, it travels through the argon gas, where it excites the mercury atoms, causing some of them to vaporize. A mercury atom absorbs some energy from the free-flowing electrons passing through; if it absorbs enough energy, one of its own electrons will jump to a higher energy level (think of it as a higher orbit around the atom nucleus). But since the atom can’t keep the electron at this higher energy level or orbit forever, the electron soon drops back to a lower energy level, releasing the energy it had originally absorbed. This energy is released in the form of a photon, which is what light is made of.

Unfortunately, the wavelength at which mercury emits photons in this situation is in the ultraviolet spectrum, and this ultraviolet light would soon fry anyone the light shines on, and wouldn’t provide visible light to see by. Fluorescent light bulbs work around this problem by having the inside of the glass tube itself coated with phosphorus, a chemical that absorbs ultraviolet light and releases visible-spectrum light at the same time. Phosphorus is the white, dusty powder you see if you break a fluorescent bulb. (Of course, if you break a fluorescent bulb you are exposing yourself and your environment to toxic mercury – for more details, and for safe disposal and cleanup instructions, see Is the mercury in fluorescent lights dangerous? on my main fluorescent lights page.) 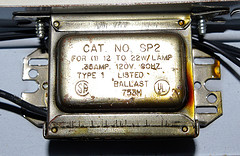 What about fluorescent ballasts? How do fluorescent lights work with their ballasts to provide an even lighting?

Without a fluorescent light ballast, your fluorescent tube would have two problems. First of all, there would not be enough of an initial surge of current to excite the mercury atoms enough to ionize some of the atoms and start the light shining. Second, once electricity does start to pass through the tube and begins to vaporize mercury atoms, the electrical conductivity of the tube increases (because the mercury vapor becomes more conductive the more it conducts). In other words, the more electricity is flowing through the tube, the easier it is for electricity to flow through the tube. This means that if we didn’t limit the current flow=, it would soon reach a level dangerous for the stability of the bulb, or for the circuit to which the light is connected. 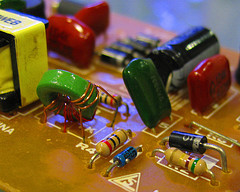 A fluorescent ballast works around both of these problems. Early ballasts and those on some existing four-foot and eight-foot tube fluorescents were magnetic ballasts; they are bulky devices that provide the initial surge of high voltage current to get the ball rolling, and then slowly reduce the current as conductivity increased. Modern, electronic ballasts do the same thing but generally start the bulb faster, with less flickering, less noise, and significantly less energy overhead, making them even more efficient than older, mechanical ballast fluorescent lights.

For a full description of how fluorescent lights work, the following Wikipedia article explains the workings in more detail: Fluorescent lamp.