You are here: Home1 / Green roofs

Stay cool with a green roof, and be cool too! 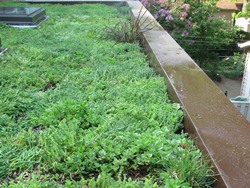 Our green roof, with sedums and a couple of annual grasses planted along the edge

Green roofs are getting more popular every year. City and even national governments are increasingly requiring green roof construction as part of commercial construction over a certain size.

Businesses are learning the value of green roofs to the corporate image as well as the ability of a green roof to lower building heating and cooling costs. Even homeowners are in on the game.

I became the proud owner of a green roof in the spring of 2012 – pictured at left – and what’s more, I put the green roof in myself – with help from my family and neighbors.

For anyone curious about what a green roof actually is, we can define a green roof as a roof where plants grow, typically in some kind of engineered soil or medium. The benefits of a green roof are many. To name just a few:

To those I would add a third type of green roof, the patio roof – a roof where people can visit, but where the majority of space is taken up by potted plants. While a patio green roof doesn’t provide as much insulation value, cooling value, habitat, or runoff control, it does offer something in these areas, is much cheaper to install, and for anyone with an existing flat roof, may be the only option given the load bearing capacity of the roof in question.

A note on retrofitting a green roof

If you are thinking about putting a green roof onto your existing home (or any other building you own, such as a cottage, shed, or commercial space), make sure you consult an engineer to ensure your building can support the load of the roof.

When we planned our ground floor renovation, we built the addition where the green roof now sits with much more extensive structural support because we knew the green roof would need it. Instead of 2×10″ joists spaced 16″ apart, which would normally be sufficient for a flat roof in our snow-prone region given a 10′ span, we used 2×12″ joists spread 12″ apart. The headers supporting the joists were also spec’d by the engineer to support the load of a green roof.

If you install a green roof – especially an intensive green roof with its thicker soil medium – on a flat roof that was not built to support the weight, you are courting disaster.

In general you want to strive for drought tolerant plants on a green roof, because the limited thickness of soil doesn’t provide much water storage capacity.

In gardens and lawns, plants can sink their roots down deep and extract moisture from deep in the subsoil during dry spells, and indeed some of the humidity from lower down rises as the soil above it dries out.

But on a green roof there is no subsoil, and nowhere for the roots to go below the medium, so you need to choose plants that can last at least a few days without natural rainfall. Either that or you need to set up an automated irrigation system to prevent the plants from drying out.

The plant genus of choice for green roofs is sedums. Sedums are succulent plants that grow naturally throughout the northern hemisphere. Many species grow very low to the ground in intense mats. Sedums can last weeks without water, overwinter well, blossom in a variety of colors and at different times, and can tolerate nutrient-poor soils (the engineered soil medium used for green roofs tends to be very low in nutrients).

Other favored plant types, especially for intensive green roofs where limits to root depth are less of an issue, include perennial grasses, and self-seeding annual wildflowers such as brown-eyed susans.

While drought tolerance is one key consideration in selecting plants for green roofs, another is heat tolerance: because green roofs are part of the built environment and typically have little shading from intense sunlight, they tend to get hotter than ground-level gardens. 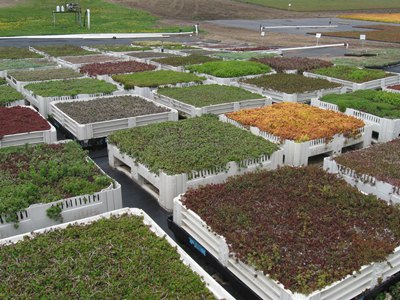 Sedum Master, the company we bought our green roof from, grows an ever increasing variety of sedums. These are their test plots, where they try out new varieties to see how they tolerate drought, how they fare in Ontario’s long, cold winters, and how vigorously they grow. 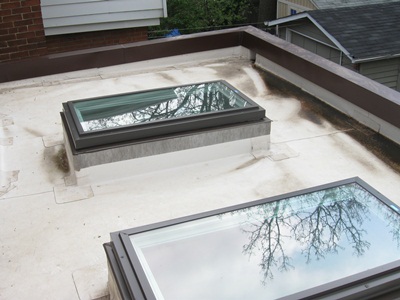 The flat roof on our dining room addition, with TPO waterproofing membrane. Popular choices for green roof membranes include asphalt roofs, EPDM membrane, and TPO membrane, which is a membrane fused together at the seams by intense heat. Drain is to the upper right. 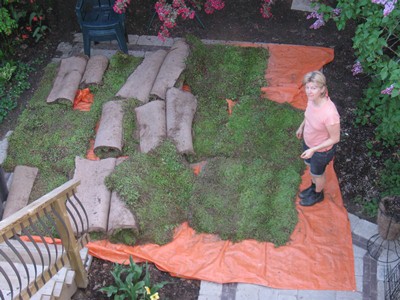 The sedums come in large rolled-up matts similar to sod. I had to carry them up the ladder in a canoe tripping portage pack because they were so heavy. Towards the end, once the main sections were in place, I cut pieces to the size I needed and could carry small sections up the ladder in one hand, while I held the sedum mat with the other.

The substrate or matting consists of a plastic tray with cup indentations to hold water, and perforations between the cups to allow drainage, covered by a layer of fibrous material. We got these up onto the roof by carrying them to the upstairs bathroom and passing them out the window. When you install the substrate you overlap two rows of cups on two adjacent edges of each sheet. 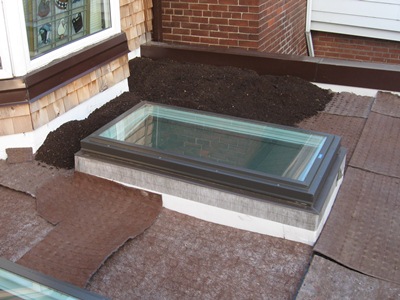 The growing medium consists of sand, crushed brick, pebbles, and a small percentage of organic matter. We lifted all this, bucket by bucket, on a rope. It was probably eight hours work just to get all the growing medium up onto the roof. I spread roughly 4 inches across the green roof. 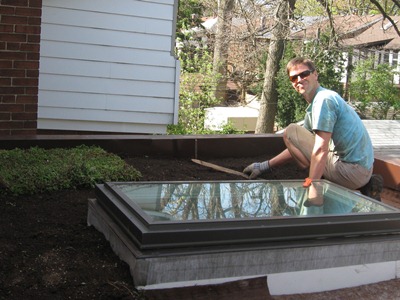 Once the growing medium is spread it needs to be levelled and tamped down. I should probably have spent more time on the tamping down – after installation it turned out things were not as even as I would have liked. 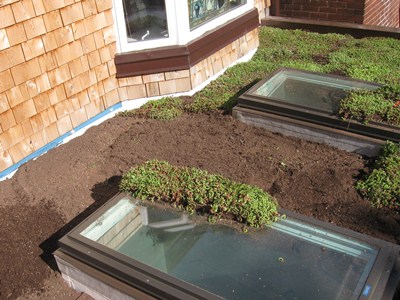 The sedums can be laid down very quickly, although the mats are tricky to cut because they have a heat-fused, plastic mesh embedded in them to hold everything together. At first I thought we would run out of sedums, but that turned out to be an optical illusion: the sedum mats on the patio down below looked small because they were far away! By the end of the job we had enough left to install a few small clumps of sedums in our front garden.

Once completed, the green roof looks a little dry and you can clearly see gaps between sections of mat. A thorough watering every few days while the green roof establishes itself will help. Luckily for us we had a good dousing of rain two days after the roof went in. 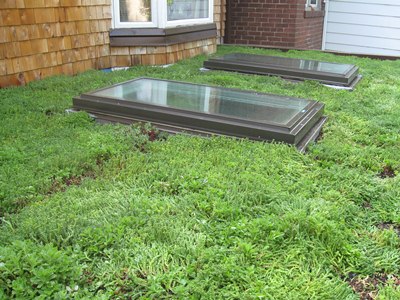 Two weeks later, the green roof is looking healthy and the gaps are already filling in; the sedums have already grown at least 2-3 inches. Three perennial grasses have also been planted, along the west side of the roof (not shown in this picture); otherwise, from our garden there’s no sign of anything growing up there!