Will they really save you energy and money?

In other words, you could decide a 20.5 cubic foot refrigerator is the capacity you need (and I’ll argue further down that that’s probably quite a bit more than most people really to need) and, being a good environmental citizen (or just wanting to save money on your electricity budget), you decide to look only at ENERGY STAR refrigerators, and in the end you could wind up paying substantially more to operate your refrigerator than if you had bought a particular model of non-ENERGY STAR refrigerator.

Let’s look at what contributes to this seeming contradiction. In a nutshell, the discrepancy exists because ENERGY STAR refrigerators are certified based on their energy consumption given a particular set of features. The key features are:

Let’s consider each of these in more detail.

I don’t know what is behind the different allowances; it would seem to me that the criteria are set based on the energy consumption of refrigerators that were on the market at the time those criteria were set. It may be that, because bottom mount freezers tend to have larger freezer compartments, an allowance was made for the extra work the compressor needs to do to keep that extra space cold.

Not many people go for manual defrost these days, because it’s a real pain to deal with defrosting a freezer compartment every few weeks. I remember the refrigerator we had in our first rental house in Toronto – it was from about 1930 and had a tiny freezer compartment inside the refrigerator compartment, that would become coated with so much ice within a couple of weeks of the last time we defrosted it, that there was no room left to store food! And in fact the only ENERGY STAR refrigerators available with manual defrost these days are ones with either no freezer, or with a freezer inside the refrigerator compartment, just as my 1930’s fridge was. If you’re really striving to minimize your home energy use, you might consider what we did when we ditched the 1930’s fridge: we bought a fridge-only unit (17 cubic foot Woods fridge, at that time one of the most efficient units on the market) and a 10 cubic foot freezer (also one of the most efficient). At that time our combined fridge and freezer used less (for 27 cubic feet total space) than most equivalent 17 cubic foot combination fridge freezer units, although refrigeration equipment has become a lot more efficient since the early 1990’s, and these units wouldn’t come close to meeting today’s standards for ENERGY STAR refrigerators or freezers.

If you do a lot of freezing of home-preserved foods or local produce or meat, or you store a lot of store bought freezer goods, this may be a better option than buying a huge fridge with an auto- defrost freezer. The main drawback of this approach is that the freezer is typically off in another, out of the way room; in our case it meant we had to run to the basement every time we wanted an ice cube! 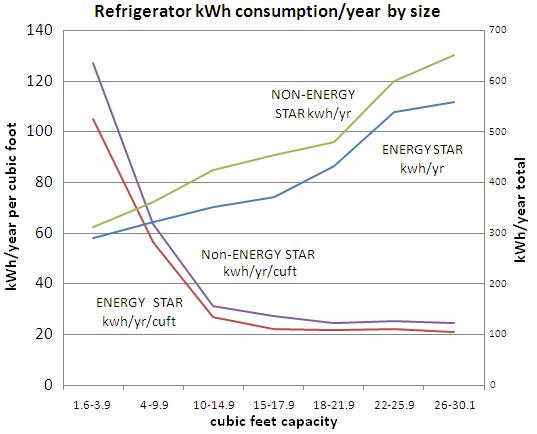 This brings me to one of the most important criteria for buying an energy efficient refrigerator: make sure you buy the right size refrigerator. There has been a trend in recent years to ever larger refrigerators – partly because as refrigerator efficiency inreases, people can afford more capacity for the same energy cost (this is called the Jevons paradox: any increase in efficiency is offset by an equivalent increase in consumption). The trend is also a result of changing shopping patterns: people tend to do more buying in bulk than they used to, for example at Walmart or Sam’s Club or Costco.

My mother in law recently redid her kitchen, and when I saw it during our annual pilgrimage to Ohio last Christmas I could not believe the size of her refrigerator. She lives on her own, so she could probably get by with a 10 to 13 cubic foot refrigerator (GE makes an 11.5 cubic foot refrigerator, model GBC12GAX*,that uses 417 kWh per year). Instead she bought a Fisher & Paykel model RF201ADUX1, with 20.1 cubic feet capacity, that uses 550 kWh per year, or more than 30% more.

And the worst of this is that a big refrigerator tends either to stay empty – in which case, every time you open it, much of the cold air falls out, leading to reduced efficiency – or tends to keep getting fuller, because it’s so big it’s easy to forget the many leftovers stored there, and so they rot. (Americans throw out about 40% of all the food produced in the country.)

The most efficient ENERGY STAR compact refrigerator models in the 2.0 cubic feet and under range are:

But you can actually get more capacity than these, for only 1 extra kWh per year, if you go with any of the following Frigidaire 2.4 cubic foot ENERGY STAR compact refrigerator models, all of which are rated at 253 kWh year: models LFPH25M4LW, LFPH25M4LB, FFPH25M4LB, CFPH25M4LB, or CFPH25M4LW.

The very best, in terms of energy efficiency of an ENERGY STAR compact refrigerator, is actually even bigger – the Fisher & Paykel model RB36S, which is 3.1 cubic feet (but does not have a freezer) uses a mere 145 kWh per year.

My recommendation if you’re shopping for ENERGY STAR refrigerators is to start by looking at what you really need. If your current refrigerator seems too small, it’s not necessarily the case that a bigger refrigerator will be better; overfilled refrigerators are often a symptom of an over busy lifestyle, or an unhealthy obsession with sanitation, rather than of the need for more capacity. For example, in Costa Rica, where I lived for a year, most people have either a tiny refrigerator or none at all; even in their hot tropical climate, eggs, cabbages, peppers, and tomatoes, for example, are almost never refrigerated (even in the store). You’ll save a lot over the lifetime of your refrigerator if you can keep it small. Not only will you cut your energy costs but you’ll probably reduce the amount of food you wind up throwing away because it rots before you remember you left it in the caverns of an oversized fridge.

Consider also whether added features like an automatic ice maker or in-door ice dispenser or cold water dispenser are really that important to you. Everyone likes added convenience, but that convenience comes at a cost to your household energy budget, and ultimately to the environment we all share.