A few months ago I added a product link to dryer balls on my Energy efficient dryers page. I had seen these dryer balls listed by several merchants whose products I offer, and each merchant mentioned an ‘independent study’ showing that the dryer balls cut the energy used to dry laundry by up to 25%.

Dryer balls are air-filled rubber or plastic balls covered in bumps, which you toss into your dryer along with a load of laundry. In theory, these balls fluff your garments more during tumbling, which softens clothes, and keeps them from clinging together, so that more air exchange occurs between the clothes, leading to faster drying times.

That’s the theory, anyways. I should have been more skeptical. I once spent $80 on a set of plastic laundry discs that were supposed to make laundry detergent obsolete. My friends and I were convinced these discs saved on detergent, reduced water pollution, eliminated unwanted detergent smells from our laundry, and did as good a job cleaning clothes as Tide. 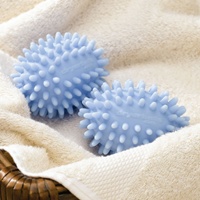 Dryer balls from Gaiam
No longer for sale on my site

But eventually we noticed that our clothes were getting grayer and grayer, which is what would have happened if we had washed our clothes in plain water. I later heard that a Consumers Reports study found no difference between washing with laundry discs, and washing just in water. But they’re still for sale all over the place.

Challenged by a visitor

Given my past experience with laundry discs, I should probably have done a dryer balls review before posting the product on my website. I don’t want site visitors to buy something through me that doesn’t actually save them energy.

A couple of weeks ago I received an e-mail from Svein Medhus, who had found my quote about independent testing of these dryer balls. Svein asked me for evidence of the claim. I went looking for confirmation of the “25% reduction in drying time” statement, and found that hundreds of websites sell this product and quote the claims, but no site provided the independent test results.

So I fired off an e-mail to Nellie’s All Natural, who are the distributor of Nellie’s Dryer Balls, the product I featured. Within a day I got back a Microsoft Word document containing the test results. 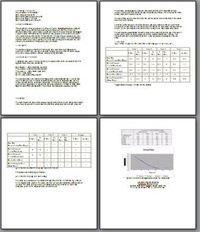 The test document states that no part of it may be reproduced unless the entire report is reproduced in full, so I won’t quote it, but can send it to anyone who wants a copy, and I can paraphrase conclusions and measurements within the report. Here are some interesting points:

After reading Svein’s challenge to the report, and looking at the timed results more closely, I agree with him that there is a problem reconciling the data with the testing company’s conclusions. Let’s look at a chart showing percentage increase over dry conditioned weight for the four loads tested (two with, two without dryer balls). I’ve rebaselined this so that the Y axis denotes percentage of dry weight, instead of weight increase; so the 160 line means the laundry at that point would have weighed 160% of dry weight, or 60% more than dry weight. 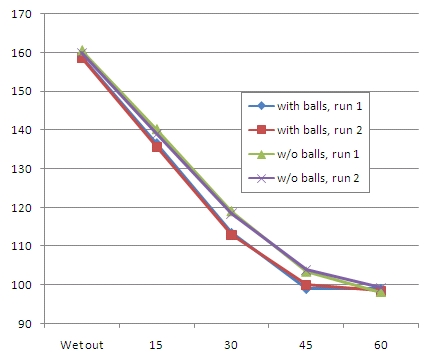 As you can see, the two loads that used dryer balls definitely had a bit of an advantage in terms of having a lower total weight through most of the drying cycle. But can we really conclude a 25% speed-up in drying time? From the graph, it looks like the runs with dryer balls made it to the finish line by the 45 minute mark, while those without dryer balls didn’t make it until the 60 minute mark, which seems to support the theory that the dryer balls shortened drying time by 15 minutes or 25%.

Except that we really don’t know when, between the 45- and 60-minute marks, each load achieved 100% of starting dry weight, because the loads were only weighed every 15 minutes. Suppose we tried to smooth out the chart lines on 5 minute intervals, predicting each unknown 5 minute interval so that the overall line from previous points stays smooth. Then our chart would look more like this: 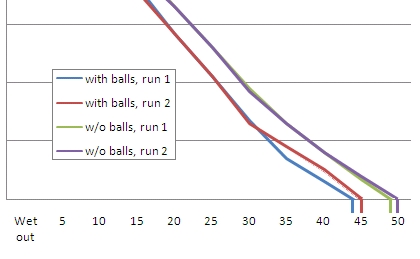 Drying rate with and without dryer balls after smoothening

In other words, while the loads with dryer balls did dry faster, they only dried about 10.7% faster – nowhere near the 15-25% claimed in the report or the ‘up to 25%’ claimed by the company selling these dryer balls. And with only four runs total, it’s hard to draw any statistically significant conclusion from such a narrow gap between the runs with and without dryer balls.

Admittedly, my guess at when they did become 100% dry is speculation – but it’s clear that the original tests simply don’t support the conclusion of a 25% or even a 15% reduction in drying time. The test report even includes a statement that the improvement in drying time is ‘not significant’ but is ‘real’. We can at least agree with the ‘not significant’ part of the conclusion.

After he had reviewed the test report, Svein decided to do a test of his own, with a set of dryer balls he bought from a different company.

He ran four tests, as with the original, independent tests. He used a typical laundry load consisting of socks, underwear, t-shirts, towels, jeans, pants and a shirt. In each test he washed the laundry in a front loading washer and ran it at a spin speed of 1500 RPM to extract most of the laundry water.

Svein weighed the laundry items at the start and end of the drying cycle, and used an electricity meter similar to the Kill A Watt meter to measure kilowatt hours used by his electric condensing dryer (a dryer that uses a heat exchanger and water to condense moisture out of the air in the dryer). Here are Svein’s results:

From the averages, you can see that the drying time without dryer balls was actually faster than that with dryer balls, while the amount of energy used per liter of water extracted was virtually identical.

So, are dryer balls worth the money?

Does it really make sense to buy dryer balls? Do they work? Will they really save you energy or money? Here are some things to consider:

There are also some differences between Svein’s tests and those done by Technicare Services:

Again, if you really want to save money and energy on laundry, the best place to start is with an energy saving washer that washes your clothes with less energy, and extracts more of the water during the spin cycle, and then to use a clothes line or clothes rack, or make sure you have an energy efficient dryer to dry your clothes.

Why do so many sites promote dryer balls

Remember that, once someone has bought a product, unless they are unhappy with it, they tend to sing its praises to reassure themselves that they’ve made a good purchase. That’s what my friends and I did with our laundry discs, and it may be what’s behind many of the positive reviews of this product elsewhere.

Also, the sites that promote these dryer balls are just trying to earn a commission on their sale. There’s nothing wrong with websites earning commissions from product sales – if websites like mine didn’t earn money on product sales and advertising, we wouldn’t be able to operate. But webmasters do have a responsibility to make sure they’re not selling false hopes or products that don’t live up to their claims, which is why I’ve removed the dryer balls for sale from my site, and instead written this dryer balls review.

Svein has written his own review, dryer balls save no energy, on his blog, which is called The Urge for Less Energy Use.

If you have an experience with dryer balls, please comment on this page. Don’t forget that people being happy with their dryer balls doesn’t mean they actually save energy. I used a plastic laundry disk for over a year and swore by it – a teaspoon of detergent was all I needed, although our laundry did come out a bit grey. Turns out you can get exactly the same grey result with a teaspoon of detergent without the overpriced laundry disks! It would be great to hear from others who have actually measured the effectiveness (or lack thereof) of their dryer balls.