You are here: Home / Green electricity

Worth the extra cents

Electrical utilities the world over use a combination of green electricity and ‘dirty’ electricity sources, ranging from very polluting sources such as coal, to more benign ones like hydroelectric power, and finally to mostly harmless sources like wind and geothermal electrical generation.

You might think your electricity is clean and green, because your local utility claims to generate mostly from renewable sources. But electrical grids in places like North America and Europe are so interconnected, that your electricity at any given moment could be coming from the wind turbine farm a few miles down the road, or the coal-fired plant a thousand miles away, depending on the flux of supply and demand.

When we talk about Green Electricity we’re really talking about two different things, depending on the context:

The point of this distinction is that, in most cases, you can’t choose where the power racing through your electrical wires comes from. So in a mixed electrical grid like the North American grid, no household can claim to be using electricity that is 100% green in the first sense above, even if they are buying 100% of their electricity from a green supplier.

Many people in countries such as Canada, which gets a lot of its electric power from hydroelectric projects, think that their energy is clean because it only takes falling water to generate it.

Given these problems with large dams, many renewable energy experts don’t include large-scale hydro projects in their definition of green electricity. Instead, they favor a small-scale hydroelectric generation sometimes referred to as microhydro.

My family and I stayed for a month at the Durika Biological Reserve in the Talamanca mountain range in sourthern Costa Rica. This intentional community of 30-odd inhabitants and up to 25 visitors at a time, is entirely powered by one microhydro installation. The installation does not disrupt the flow of the mountain river from which it draws its power.

The Durika microhydro project consists of a small dammed area on a mountain river; most of the water flows over the top of the dam, much as it does over waterfalls both upstream and downstream.

A small portion of the water flows to one side of the dam and down a 6″ pipe. This pipe falls several hundred feet to a high-pressure microturbine. When you see the water coming out of this turbine it’s astonishing how little there is and how slowly it travels – the energy comes from the high pressure that is built up by the substantial drop in height between the water intake and the turbine. This small system causes minimal disruption to local ecosystems, yet generates 20 kilowatt hours of electricity 24 hours a day year-round.

Many green electricity suppliers insist on providing only microhydro, not large-scale hydro, in their mix of green electricity products. While the Durika installation is an example particularly suited to mountain rivers, other types of microhydro projects are used in less hilly areas, but always with the same objective: only take a portion of the river’s water, and avoid disrupting the waterflow or creating a reservoir.

Green electricity and the electric car

Electric cars, and plug-in hybrids, seem to be gaining ever more attention these days – Toyota has a plug-in hybrid, Chevrolet makes the all (or mostly) electric Volt, Nissan sells the electric Nissan Leaf, and you can now get an electric Smart Car. While it’s still better to power an electric car with coal-fired power, than to run regular cars on gas, better still is to run these electric cars on green energy.

You can buy non-polluting electricity either by paying to have a green supplier generate all your electricity for you, or by a program sometimes known as a Green Tags program, where you buy blocks of green power in advance, in order to allow a green supplier to put that much electricity on the grid over a specified period.

When you sign up with a green supplier, they bill you each billing cycle for the amount of electricity you used, and they are responsible for putting that much electricity on the grid as a result of your using it.

When you sign up with a green tags program through your local utility, you typically purchase a block of electricity, perhaps 100 or 250 or 500 kwh. Usually you are paying only for the premium (the price difference between the green and the dirty electricity you’d otherwise get), and by adding this premium to your bill you obligate your utility to buy that much electricity from a green supplier.

When you sign up directly with a green tags program, you are simply paying that program money to reflect the fact that it costs more to supply clean electricity than dirty electricity, because the dirty electricity sources are artificially subsidized. By buying green tags you make it more affordable for a green supplier to generate their electricity, and therefore, in theory at least, you increase the amount of green electricity on the grid.

When looking for a green supplier, you should find answers to the following questions:

The electricity coming out of my wall sockets isn’t really any different than that of my neighbors. It comes from the same combination of sources, such as coal, nuclear, large-scale hydro, natural gas, and truly clean electricity. But by agreeing to pay a green supplier to generate electricity on my behalf, I create demand for green electricity and eliminate demand for dirty electricity.

Each month, my green supplier generates an amount of electricity that matches the recent consumption of its customers. What houses or factories this electricity goes to is anyone’s guess, and in fact it doesn’t matter. What does matter is that consumers, by signing up with a green supplier, are helping create demand for cleaner electricity sources.

Green customers pay a premium for clean electricity. This isn’t as it should be – it should really be people who buy dirty electricity who pay a premium, to cover the added costs of the pollution they cause. The fact is that most electrical generation is artificially subsidized by the general public.

The health and environmental impacts of burning coal are paid for by everyone around the world, as problems such as acid rain, smog, and climate change get worse with every ton of coal we burn. They aren’t paid for specifically by the people using the coal-fired electricity. 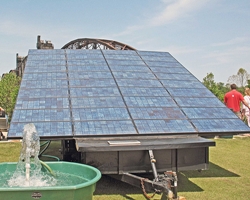 Many people get hung up over the fact that you can’t control what source of electricity powers your particular home, to argue that buying renewable electricity is a sham. But it really does make a difference for the better.

I’ve seen this with Bullfrog Power. It seems that every month or two they are announcing a new agreement to buy power from a wind farm, or to help with the construction costs of a new wind turbine. As their customer base grows, they form more and more partnerships with green suppliers, which creates demand for new sources. And as these new sources come on line, less dirty power has to be generated to meet overall demand.

What does it cost?

Green electricity typically costs 20-40% more than what you’ll pay with your regular utility. Remember to look at the total cost of your electricity bill. In Ontario, there are a number of charges that are added to your bill based on consumption. The percentages below show how much each contributed to my final electricity bill from my dirty electricity supplier, in January 2006:

In Ontario, the only charge that changes is the generation charge. The electricity is still delivered by the grid, so the price per kilowatt for delivery stays the same. The same regulatory charges per kilowatt apply regardless of where those kilowatts came from. And I pay debt retirement charges (to cover the reckless spending of Ontario Hydro on overpriced, under-performing nuclear power plants over the past thirty years) even though I’m paying for green electricity generation.

As you can see, less than 40% of my last dirty electricity bill was for the electricity generation. You need to bear this in mind when people tell you green electricity costs 50% more, or twice the price of your current supply. Before we switched over, we were paying $0.05 per kWh for generation charges. When we switched, the price jumped to $0.083 per kWh. That sounds like a 66% increase. But the other charges per kilowatt didn’t change, so in fact we only wound up paying a 25% increase per kilowatt hour.

But in our case, we didn’t wind up paying 25% more on our electricity bill after we switched to a green supplier. And neither will you, if you combine the switch with an ambitious plan to save electricity. The key is to combine your switch to a green supplier with cuts to your energy use.

If you’re concerned about being able to afford green electricity, another approach is to cut your electricity use first, until your consumption is low enough that even after a switch you’ll be paying no more than you did at the outset with your original supplier.

Take a look at the following chart, which shows our household electricity consumption, and our total cost for electricity, from February 2005 to May 2008: 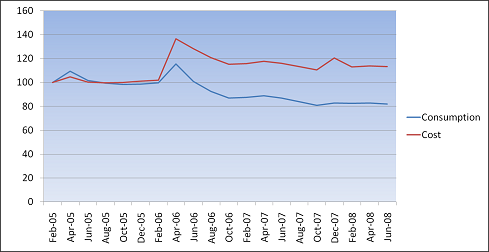 Electricity usage and cost before and after switch to green supplier

This chart shows our cost and consumption over time, relative to our bill of February 2005. I computed the kilowatt hours per day and total cost per day, and normalized to 100 for February 2005. The first green bill came in April 2006. The spike in consumption in April 2006 is reflected in April 2005 and April 2007; it may reflect an actual reading after several estimated readings. In any event, there are two key things to notice about this chart:

Since this chart only shows what we actually paid, it reflects any price increases in our green electricity after we switched, but does not reflect any price increases in conventional electricity after we switched. If we had stayed with our conventional supplier, we would probably be paying about 5-10% more by June 2008 than we did in December 2005, so the 10-15% extra cash we’re paying out for green electricity, after our energy cuts, is probably closer to 5% extra.

With a little hard work, you can afford green electricity, and you’ll be helping make the planet a healthier place for all of us.

If you know of a truly green electricity supplier in your region, contact us and let us know; we’ll point to them.

Bullfrog Power (www.bullfrogpower.com) sells power through your local utility to residents of Ontario and Alberta. Their power is sourced from wind turbines and micro hydro. Our family was one of the original “Bullfrog 100” – the first customers to sign up.

My mother in law lives in Ohio, where green electricity is starting to become available to people who aren’t able to generate their own. GreenEnergyOhio.org, specifically their pages on green pricing programs and on green power, may be of help.